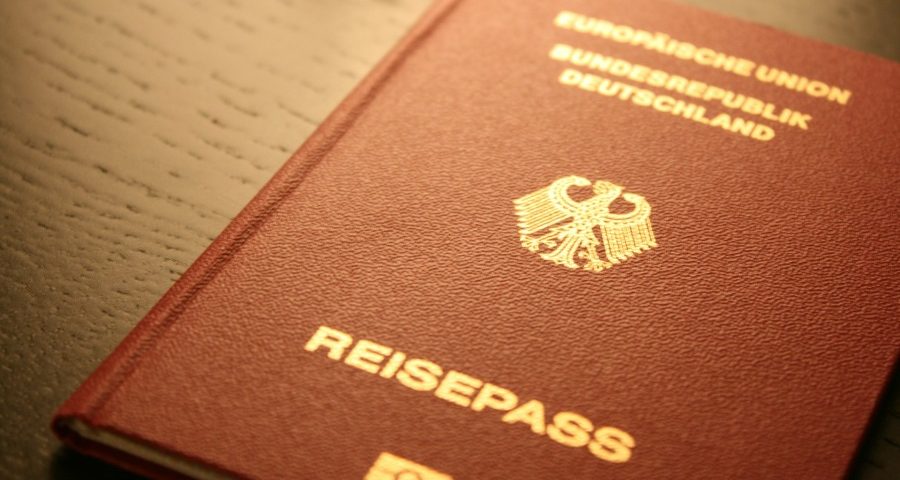 Pax Europaea is the long period of relative peace that has been enjoyed by Europe since the Second World War. In this article, we take a close look at the victims of the Second World War who had to flee their home countries of Germany and Austria because of political, ethnic, racial, and religious persecution. Several laws have now given them and their descendants the opportunity to restore their lost European citizenship. A similar approach has been adopted by Portugal and Spain, which have been trying to redress past injustices by simplifying the path to citizenship for descendants of the Sephardic Jews, who were expelled from the Iberian Peninsula in the fifteenth century.

How do these legal initiatives work in practice? Can they remedy the injustices of the past?

The most recent law regarding victims of the Second World War was adopted in Germany. On 30 August 2019, Germany’s Federal Ministry of the Interior, Building and Community (BMI) issued two decrees under Article 116 (2) of the Basic Law (Grundgesetz) that would make it easier for people persecuted by the Nazi regime and their descendants to obtain German citizenship. This group includes German Jews, members of the Communist or Social Democratic parties, conscientious objectors, Jehovah’s Witnesses, Quakers, Sinti, and Roma.

These decrees were responses to two laws adopted under the Nazi regime: the Law on the Revocation of Naturalizations and the Revocation of German Citizenship of 14 July 1933, and the Eleventh Ordinance to the Reich Citizenship Law of 25 November 1941. Both laws stated that individuals could be deprived of German citizenship on political, racial, or religious grounds. The difference was that the first law focused on individual cases: for example, the Reich Law Gazette (Reichsgesetzblatt) published lists of Jews (first immigrants, later citizens) who had been denaturalised or added new restrictions one by one, such as denial of the right to vote and forbidding marriages with ethnic Germans. The second law applied to all “non-Germans” residing in Germany.

The first time that victims of the Nazi regime were granted the right to re-establish their German citizenship was in 1945 when the Allied Control Council for Germany proclaimed Law No. 1 in Berlin which repealed the political and discriminatory laws of the defeated Nazi regime. Under Article 116 (2) of Germany’s Basic Law, adopted in 1949, any citizen during the Nazi regime, or his or her descendants, who lost their citizenship for political, racist, or religious reasons has the right to have it reinstated. In 1968, the German Federal Constitutional Court ruled that citizenship would be restored only upon application as not all the victims of the Nazi regime would want to return to Germany.

However, these rules on reinstating citizenship failed to address specific cases and hundreds of applications were denied. In response to this problem, the London lawyer Felix Couchman established the Article 116 Exclusions Group to pressure the German government. The group has lobbied Germany’s political parties and secured the support of several opposition parties, including the Greens, Die Linke, and the FDP, who have been leading a parliamentary inquiry on the issue. The pressure group has united people from the UK, USA, Canada, Israel, Columbia, and Australia, among other countries, who have tried to exercise their right to reinstate their German citizenship but failed.

The Article 116 group’s campaign was successful to the extent that, on 30 August 2019, Germany issued the two decrees granting easier access to German citizenship. But not all the problems raised by the group have been remedied, and so group has continued its work.

Besides these new regulations, Germany has softened several other important requirements for those applying to have their citizenship reinstated. Applicants no longer must prove that they are financially solvent. Additionally, only basic knowledge of the German language and the country’s legal and social systems is required, and this will be verified free of charge only during one-on-one conversations with the relevant German diplomats outside the country. Another important benefit is that the applicants will not have to forfeit their current citizenship to receive German passports.

The answer is both simple and complicated. One reason mentioned in the official press release issued by Federal Minister of the Interior Horst Seehofer is that the new measures were prompted by Brexit and the unavoidable inflow of immigrants from the UK. According to the Telegraph, there had been around twenty applications annually for restoration of German citizenship submitted at the German embassy in London. Yet after the yes vote for Brexit in 2016, the number of applicants increased, peaking at 1,506 applications in 2018. A similar increase in applications was recorded in New York after Donald Trump was elected president: the numbers grew from fifty to seventy applications annually, in 2014 and 2015, to 235 applications in 2017.

Why would victims of the Third Reich want to return to Germany after the horrific experiences they or their ancestors had in the past? As I found out from different stories published in the media, their motives are different.

According to some applicants, they were interested in their German ancestry mainly through their grandparents or parents. For some of them, the original interest germinated into a real decision after the developments mentioned above took place. For example, Yorkshire resident Judith Rhodes educates schoolchildren in Germany about the Holocaust. She tells the story of her mother who was brought to the United Kingdom on the Kindertransport in 1939, showing the German pupils her mother’s scant belongings at the time and her tiny suitcase. A German passport would enable her to continue her mission more easily after Brexit goes into effect. However, a German passport is not so easily obtained. As Adrian Goldberg admits, even though a German passport would let him move around the EU freely, he feels that it would be a betrayal of his father, who also came to the UK on of the Kindertransport.

US national Terry Mandel said that her right to obtain a German passport was always a plan B for escaping the US and having the opportunity to live in Germany, which “feels safer and more receptive and accommodating and welcoming than many, many other places.”

Although it was not mentioned in the media sources we have quoted, above, economic opportunity could be another reason for obtaining German citizenship. This motive might be especially important for people who move to Germany (or other European countries) from less economically developed countries.

12 March 1938 was the day of Anschluss, Austria’s annexation by Nazi Germany. Along with their regime, Nazis also imported their policies regarding non-ethnic German citizens, inserting them into Austria’s legal system. That meant that the Holocaust spread into Austria as well, and those who were not eligible for naturalization (non-Austrians) either had to leave the country, or were sent to concentration camps.

After Germany issued the two decrees in August 2019, Austria responded by pursuing similar legislative initiatives regarding the restitution of Austrian citizenship to the Nazi regime’s victims in Austria. With support from the local Jewish community, Austrian lawmakers voted to amend the Austrian Citizenship Act, thus making it easier to restore or acquire citizenship, and without having to renounce citizenship in other countries. The amendment went into effect on 1 September 2020 and applies mainly to two groups of applicants: “Austrian citizens and persons who were citizens of one of the successor states of the former Austro-Hungarian Monarchy or stateless persons who had their primary residence in Austria but had to leave Austria before 15 May 1955 because they were persecuted by the Nazi regime,” and “[d]escendants of these persons in direct descending line, including adoptive children who were adopted when they were minors”

Spanish and Portuguese Citizenship for Descendants of Sephardic Jews

Germany and Austria are not the only countries in the European Union that have been dealing with historical injustices by granting citizenship to victims and their descendants. Portugal and Spain launched similar processes for descendants of the Sephardic Jews, who were expelled from Spain under the Alhambra Decree or Edict of Expulsion, issued on 31 March 1492. Portugal followed suit by issuing a similar decree expelling Jews and Muslims in October 1497. The main reason for the expulsions was the Inquisition, which tolerated no religions other than Christianity. The Inquisition started in Spain in 1478, and Jews who wanted to avoid being force into accepting Christianity emigrated to neighbouring Portugal. Portugal had entry fees but accepted immigrants until Manuel I of Portugal married a Spanish princess and conceded to the demands of the Spanish court.

In 1987, President Mário Soares asked for forgiveness for the Inquisition as it had affected Portuguese Jews. In 2013, Portugal issued citizenship restoration decrees with no application deadlines. Spain followed Portugal in 2015, although it imposed a 1 October 2019 deadline for applications. However, it later decided that the law would remain in effect indefinitely in extraordinary cases or for humanitarian reasons.

One of the likely incentives for passing such laws is the recent high outflow of people from Spain and Portugal due to economic crisis in these countries. The estimated number of Sephardic Jews worldwide is 2.3 million. According to the Guardian, “132,226 people of Sephardic descent applied for Spanish citizenship before the deadline [. . .] more than 30,000 from Mexico, 26,000 from Colombia, 14,000 from Venezuela, 7,000 from Argentina, 5,400 from the US and 4,900 from Israel.” Applicants also hailed from Panama, Ecuador, Brazil, Turkey, France, the UK, Serbia and Montenegro, Peru, Chile, Morocco, and Afghanistan. The number of applications for Portuguese citizenship increased following the 2016 Brexit referendum and the election of Donald Trump as president in the U.S.: “Before the election, we issued maybe 20 or 30 certificates but now it is around 1,500 certificates and applications are coming from multiple countries.”

The most interesting question is how applicants prove their eligibility for re-naturalization via ancestors who left Spain and Portugal over five hundred years ago. For example, in Spain, applicants can show their descendancy by proving their knowledge of one of the Sephardic languages (Ladino and Haketia), having the same surname as an ancestor, or presenting a wedding certificate stating that their marriage was performed according to the Sephardic ritual.

There are incredible stories about the ancestors of the Sephardic Jews who returned to Portugal. For example, the Habibs from Turkey found out that their ancestor was from Portugal and decided to apply for Portuguese citizenship. While visiting Portugal, the family matriarch was worried that she did not know the local language. However, she ordered food in her family’s language, Ladino, and was understood by the locals.

Today, the COVID-19 pandemic has dramatically affected migration around the world. But with the increasing importance of postcolonialism and the vigorous attempts made by countries striving to correct the mistakes of the past show that the process of returning the descendants of the exterminated and expatriated cannot be considered complete.