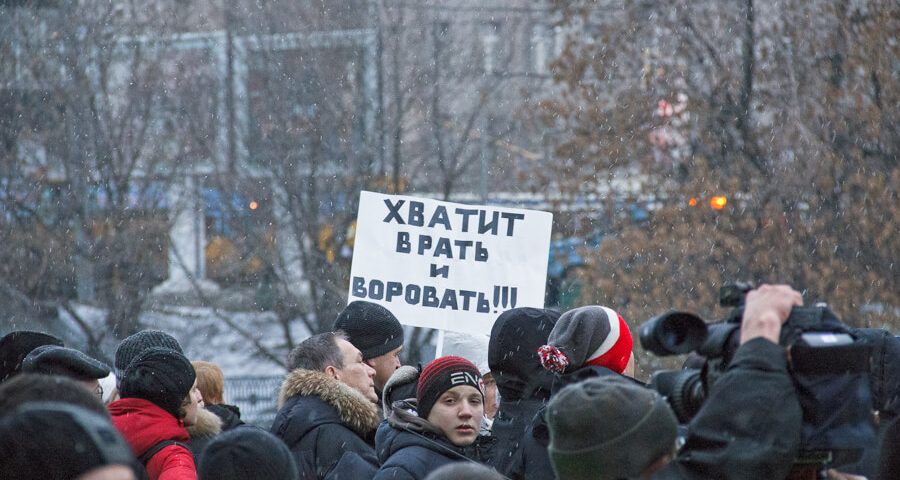 Protest at the Bolotnaya square. Source: Flickr/Andy One

Ahead of “weekend protests” that customarily take place in Moscow, OVD-Info sends out an  email to subscribers with information, including useful recommendations and links to its legal bot, a detailed guide on what to do if you are arrested, a legal cartoon, and a telephone number for operational communication with lawyers (materials on the organization’s website are available in Russian only).

OVD-Info is an independent human rights and media project launched in December 2011 at the height of the protests following alleged ballot-rigging in the Russian parliamentary elections. Initially, the project worked as a news organization tracking mass detentions and reports of their occurrence. Over the years since, OVD-Info has evolved into a nationwide project that monitors the exercise of the right to freedom of assembly and brings to light politically motivated repressions all over Russia.

In late December, OVD-Info launched two major online mapping projects: one is a map of Russian cities where it is not allowed to assemble “peacefully and without weapons.” The other is a map of cities where politician Alexei Navalny has organized public meetings during his election campaign.

The first map, entitled “Where Things Are Forbidden”, is based on local legislation stipulating the freedom of assembly. It shows how the right to assemble “peacefully and without weapons” is exercised on the example of 16 cities. Territories closed for mass meetings are marked in red. Respectively, the redder the city map is the more limited the choice of place for a public event. The territories where political activism up to a hundred people is allowed without any formal procedures—so-called “Hyde Parks”—are marked by green color. At the present time, Chelyabinsk, Izhevsk, Kazan, Krasnoyarsk, Nalchik, Novosibirsk, Omsk, Yekaterinburg, Moscow, and St. Petersburg are visible on the map. In particular, the map shows only 1.94% forbidden places in Moscow which are the territories adjacent to the Kremlin and to the courts; other centrally located places are mostly open for mass actions. “However, as experience shows, it is almost impossible to get permission for a mass protest meeting in the city center”, the authors explain. In comparison with Moscow, the situation in Yekaterinburg is very different, with 24.83% of the city area off limits. In particular, almost the entire space of the city center, as well as territories adjacent to educational and medical institutions, sports grounds, religious buildings are closed for public events.

Another map—“In the Wake of Navalny”—demonstrates Aleksei Navalny campaign visits to regions and provides with information about findings of his political activities.

The project grew from its Moscow level and has covered the Russian regions when country-wide anti-corruption protests swept Russia on 26 March and 12 June 2017. Some people have faced criminal prosecution. All of them have been charged under Article 318 of Russia’s Criminal Code for using force against police officers. OVD-Info set up a coalition of partner NGOs to provide the arrested with legal assistance. It includes the Human Rights Centre Memorial, the Rus Sidiaschaia (“Russia Behind Bars”) movement, Public Verdict Foundation, and Progressive Law Movement. Lawyers provide the arrested with legal advocacy in national courts and complaints to the European Court of Human Rights.

A new online product based on legal data—legal guide on 26 March—was also launched. It offers a collection of “personal files” on protesters subject to criminal prosecution for using force against police officers. The guide is available in English on OpenDemocracy.

According to the project’s founder Grigory Okhotin, expansion to the federal level requires more online services, more visual products in the form of instructions, videos, lectures, and legal bots. Okhotin explains, “Protest activities have significantly accelerated our growth. Not long ago, our constant monitoring  of mass detentions was limited to Moscow. But during the protests, we started to connect activists from regions and human rights lawyers by our legal ‘hotline’ because the local authorities tended put a great deal of pressure onto participants and organizers of protest meetings. Everything that happened was a trigger for launching new ideas such as the legal bot on Telegram. In addition, several federal media invited us to cooperate, and that has also resulted in the initiation of new project. There are almost no professional teams working in the regions; we are creating the online-services instead. At the same time, we are gradually establishing partnerships with local human rights NGOs and groups and then let our partners adapt our legal products to the needs of a certain region.”

An example of a particular legal service easily adaptable to regional needs is the Juridical Document Generator launched in May. It is a collection of standard applications and appeals for us in legal defences in freedom of assembly cases. Today, about four hundred people have downloaded documents from the generator. Another legal service—Legal bot on Telegram—explains how to act if you are placed in detention for taking part in a public meeting. The bot introduces the Russian laws regulatung the legal procedures around detention. This Telegram channel has about three thousand followers. In addition, OVD-Info prepares legal references and instructions which also explain how to act when under detention, how to defend yourself in court, and how to remove underage protesters from police lists of suspects for “prophylactic” treatment.

Okhotin says these legal services are in demand. The basic instruction Help yourself has tens of thousands of page views, significantly more than those facing a real risk of detention.

Furthermore, daily work also continues. OVD-Info regularly publishes resource packs meant to clarify certain aspects of the Russian law, most of them unknown or obscure to the general public. Human rights activism and journalistic initiatives such as the “hot line’, monitoring of detentions, and offline legal service are supported by crowd-funding. On such occasions as mass rallies followed by massive detentions, the core team is assisted by volunteers. Regular financial reports can be found on the OVD-Info website.[:]