The Baikonur Cosmodrome: Are There Legal Ways to Address the Danger? 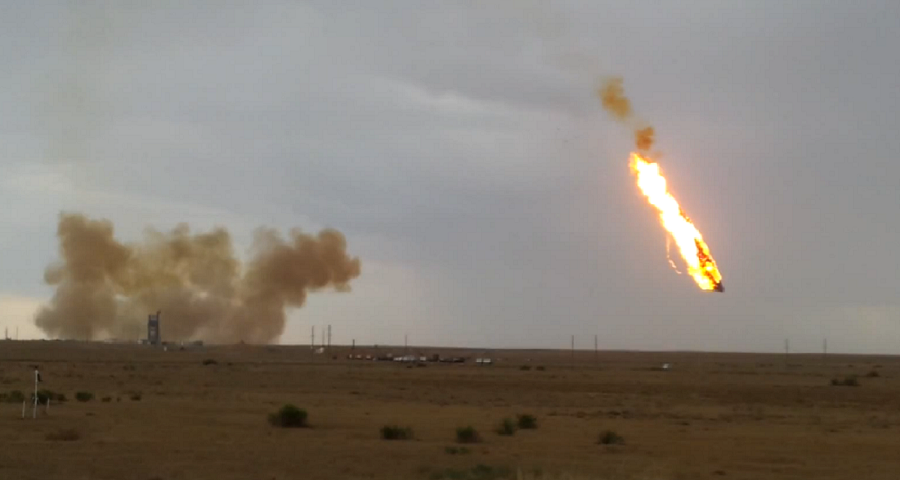 Dangerous incidents and the use of toxic fuel at the Baikonur Cosmodrome in Kazakhstan have been a matter of concern for the local community and environmental activists for decades. Are there any legal instruments that could address these concerns?

Since its creation in 1955, the Baikonur Cosmodrome has been the scene of many incidents. While it is clear that space activities involve significant risks and are never a hundred percent safe, the frequency and importance of incidents over recent years in Baikonur raise many questions.

China, Russia and Kazakhstan have opted for continental space facilities. While in principle rocket trajectories are calculated to fly over barely or uninhabited areas, in practice space debris can be found more than 80 km outside of this zone. The situation is even more critical for debris from fuel combustion and earth-bound fuel remains.

In October 2018, an incident forced members of a manned mission to the ISS to make an emergency landing. In June 2017, the fall of debris caused a fire on land during a cargo ship launch to the ISS. Fortunately, the fire occurred in an uninhabited area. However, one person died and another was injured in the debris recovery operations. In 2015, rocket fragments containing highly toxic fuel—heptyl—ended up in Siberia, in the Chita region.

This toxic fuel was still on a topic in 2013 when a rocket crashed a few seconds after takeoff. The remaining fuel ignited and a cloud of toxic smoke threatened the residents of Baikonur, located about 50 km from the scene of the incident. While the authorities advised the residents to stay in their homes, they did not consider the real danger to the residents. The risk of toxic pollution from this accident has been minimized.

It is this propellant that is at the center of the concerns of environmental organizations. Indeed, Heptyl or UDMH used as propellant for Proton-M rockets is both a health hazard and dangerous to the environment. On several occasions, experts have taken a position on the dangers associated with the use of these chemicals. In its 2004 report, the UNDP pointed out that in the context of the exploitation of the Baikonur Cosmodrome, these products “(…) have carcinogenic, mutagenic and teratogenic effects on biological organisms.” The Russian space program was supposed to replace this old model with a new type of rocket (Angara 5) no longer requiring use of this toxic fuel. However, it seems that a lack of resources in the Russian space program has delayed deployment of this new model.

The Kazakh authorities have repeatedly raised the health and environmental problems associated with the operation at the Baikonur site, particularly following these various incidents, in parallel to spontaneous mobilizations of ecological organizations and local residents. However, it must be noted that the close relationship between Russia and Kazakhstan and the economic benefits for the region continue to have a significant influence on this issue.

Faced with the significant environmental and human damage around the site of the cosmodrome, eco-activists are seeking intervention or even compensation from the authorities. In theory, different legal means of appeal exist on international and national levels. However, we will see that in reality, the Russian authorities and the Russian judicial system do not seem to want to follow these procedures.

International Law: The 1972 Convention on International Liability for Damage Caused by Space Objects (entered into force on 22 January 1974)

The Convention distinguishes two types of liability depending on the location of the incident (on the earth’s surface and in outer space). In casu, the damage occurred on the earth’s surface. Thus, Article 2 of the Convention provides that “the launching State shall have absolute responsibility to pay compensation for damage caused by its space object to the surface of the Earth or to aircraft in flight.”

The term “absolute” is important: on the one hand, there are no limits to the actual compensation and on the other hand, no proof is required from the victims. This is a case of objective fault. It should be noted that this very broad and comprehensive type of protection is very rare in international law. The spirit of the Convention was to fully protect persons not involved in space activities. In addition, the Convention provides for a system of joint and several liability between the launching States. While there is a lack of legal definitions for the concepts of launch states or space debris, it is widely accepted by states active in the space environment that states are responsible for the actions of national private operators in space.

However, the mechanism provided for in the Convention is limited. Indeed, this is a procedure only between States. Also, in the case of Baikonur, Kazakhstan would have to act against Russia on the basis of the Convention. In practice, this scenario is absolutely unrealistic, given the economic and political links between the two states. In ‘classical’ international law, the same problem will arise, namely the need for action by one state against another in order to be able to act before international courts.

The treatment of the problem by the Russian authorities

In 2016, activists filed a lawsuit, with legal support from Ecological Rights Center BELLONA, on behalf of an environmental NGO, Baikonur Eco Monitoring. At this point, it is important to highlight the existence of an agreement between Russia and Kazakhstan in connection with the leasing and the exploitation of the Baikonur site. According to article 1 of this document, the Agreement between the Russian Federation and the Republic of Kazakhstan on the status of the city of Baikonur, the order of formation and the status of its Executive authorities (Moscow, December 23, 1995), “(…) for the period of lease of the “Baikonur complex”, the city of Baikonur in its relations with the Russian Federation is given the status equivalent to that of a city of federal importance of the Russian Federation”.

The demands of the Fund were to restore the disturbed state of the environment after the accident of June 2013, involving a Proton-M launch vehicle with 3 Russian GLONASS-M satellites on board, which exploded in the first minute after the launch. Then, 600 tons of Heptyl poured into the territory of the Baikonur complex, and the components from the interaction of the two mixtures, Heptyl and Dinitrogen tetroxide, got into the atmosphere of the Republic of Kazakhstan, covering the territory of the Kyzylorda region with its toxic cloud.

All courts ranging from the 26th garrison military court to the Supreme Court of the Russian Federation refused to accept the claim and consider the merits of the complaint. The courts motivated their decision by the fact that these issues are to be resolved at the intergovernmental level, and the NGO is not authorized to file such an application.

On 14 February 2018, Marat Dauletbaev, an activist and director of Baikonur Eco Monitoring, stated that the organization’s demands were (1) restoration of the state of the environment at the expense of funds of SC Roscosmos and the Russian Federation and (2) payment of moral damages.

The court refused to consider the demand for restoration of the disturbed state of the environment, and considered only the demand for compensation of moral harm. At the same time, the court based its decision only on the provisions of the Civil Code of the Russian Federation, ignoring international conventions, agreements between Russia and Kazakhstan, and even the law On Space Activities. On 10 April 2018, the court dismissed all claims. Mr. Dauletbaev filed a new complaint with the Supreme Court of the Russian Federation, which is now pending.

The next step could be to bring this conflict before the European Court of Human Rights (Russia being signatory to the European Convention on Human Rights). However, there are many pitfalls to this procedure. Will the formal requirements be met? For example, the obligation to have exhausted all national remedies before bringing the case before the ECHR. And, in the event that the procedure is accepted, will the Strasbourg decision be enforced by the Russian authorities?

The urgency of this problem, both for the environment and for the inhabitants of the Baikonur region, requires rapid action. Given the current position of Russia and Kazakhstan on this subject, intervention on an international level seems inevitable to achieve a successful outcome.

This urgency seems especially pressing because Russia does not seem ready to stop the use of polluting and dangerous rocket in the foreseeable future. Recently, ESA satellite launches have taken place with the same problematic type of Russian launcher (Proton-M) from another Russian cosmodrome located in Plesetsk. Its coastal position prevents fuel remains from dispersing around the cosmodrome. But here again, the impact on the environment and the inhabitants of these surrounding regions has not been taken into account. To date, Canada has only addressed questions to Russia on this subject. However, associations representing the rights of the Inuit population have also taken up these issues. A global cooperation for the protection of the environment and health could be a future perspective for both of these associations.

Lotta Viikari. The environmental element in Space Law: Assessing the present and charting the future. 2008.

Caroline Charlier recently graduated in law at UCLouvain (Belgium). Currently, Caroline is an intern at Bellona, in their branch in Saint Petersburg, Russia.