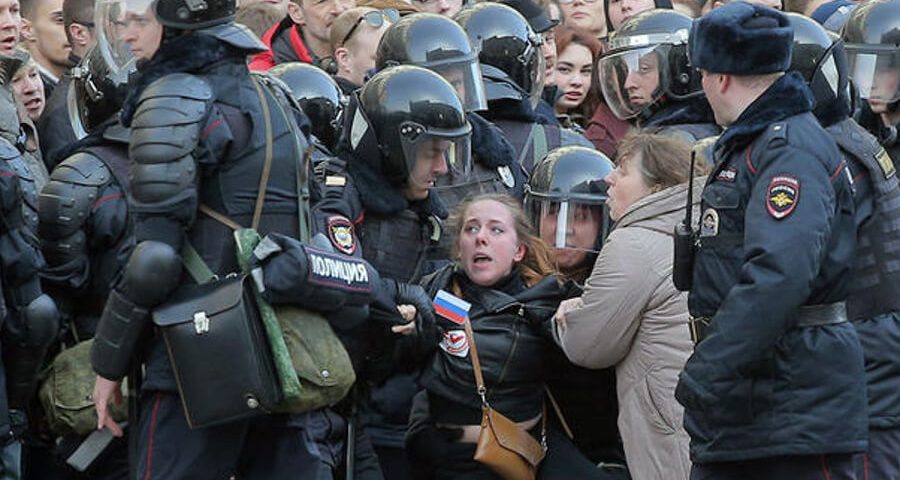 Detain during the Protest on March 26. Source: Maxim Shipenkov/EPA

OVD-Info is an advocacy group and an independent media project launched in December 2011 at the height of the protests that followed the alleged ballot-rigging in parliamentary elections, the project’s founder, Grigory Okhotin, explains. At that time, volunteers and journalists began to track mass detentions and to report on them. Within five years OVD-Info has evolved into a federal project that monitors both the freedom of assembly and the politically motivated repressions all across the nation.

On 26 March 2017 the office of OVD-Info was flooded with phone calls (a total of 2,850 calls were registered that Sunday). Okhotin continues: “We operate a 24/7 hotline, so those who were subjected to arbitrary arrests or persecution call it and tell us about their specific experiences. We then cover these cases in our regular news updates, coordinate legal assistance to those who require it and continue to keep a close watch on the situation as journalists by conducting detailed interviews with those involved and reporting on these stories for other media outlets. We analyse these cases, collect data and publish our findings as separate projects or in the form of annual analytical reports.”

Legal assistance to the arrested is provided by the partner-NGOs of OVD-Info, such as Rosuznik, the Human Rights Centre Memorial and Pravovoy verdikt. OVD-Info does not offer legal advocacy, but in 2016 it carried out 199 initial consultations over the phone and helped its referrals to put together 48 complaints (“applications”) that were then sent to the European Court of Human Rights.

Furthermore, OVD-Info regularly publishes resource packs meant to clarify certain aspects of the Russian law, which are usually unknown or obscure to the general public. For instance, an article ironically titled “Do Bears Eat Kids?” details the legal procedure of arrest and questioning of minors and lists their rights4https://ovdinfo.org/articles/2017/03/27/edyat-li-medvedi-detey.

The OVD-Info team consists of eleven people5https://ovdinfo.org/about, among them journalists, software specialists and a lawyer. On “special occasions” (such as mass rallies  followed by massive detentions) the core team is assisted by the volunteers. “For the most part we are a professional project and [rely on a permanent staff of paid employees] for our day-to-day operation”, Okhotin explains, “but on special occasions, when the police arrest scores of people at once, volunteers spontaneously come to their aid, and there are always so many of them.”

According to the NGO’s 2016 annual report, last year OVD-Info published an average of eight news updates a day that fell under three general categories: freedom of assembly (information about arrests during street protests and rallies), freedom of speech (civil and criminal procedures and persecution for the dissemination of information) and political pressure (politically motivated persecution of citizens.)

OVD-Info is not registered either as a media outlet or as a human rights advocacy group. For the past four years its key partner has been the Human Rights Centre Memorial, one of the oldest civil rights groups in Russia, that ever since its inception in 1989 has been committed to the research and publicising of the history of political repressions in the country6Russia’s Ministry of Justice has declared “Memorial” a “foreign agent” accusing it of “undermining the foundations of the constitutional order of the Russian Federation” and of “calling for a change of political regime” in the country”. http://unro.minjust.ru/NKOForeignAgent.aspx.

The infamous “foreign agent” law (officially “On Amendments to Legislative Acts of the Russian Federation regarding the Regulation of the Activities of Non-profit Organisations Performing the Functions of a Foreign Agent”) was signed by Vladimir Putin in July 2012. Formally, it was introduced as a means to prevent “any direct or indirect interference in [Russia’s] internal affairs, any form of pressure on Russia”, but in practice the label of “foreign agent” has become a powerful weapon used by the government against the country’s NGOs. According to the “foreign agent” law, the NGOs that receive foreign donations and engage in “political activity” are obliged to register and declare themselves as foreign agents. They also have to submit to frequent and extensive audits and present particularly thorough reports on their activities. The very notion of “political activity” was not specified up until 2016: before that it was up to any given court to determine whether or not the activity of a particular NGO was political7See the Federal law N 7-ФЗ January 12, 1996, amended on 19 December  2016 “On non-profit organisations”. Article 2: non-profit organisations http://www.consultant.ru/document/cons_doc_LAW_8824/87a16eb8a9431fff64d0d78eb84f86accc003448/.

Under this law Memorial was forcibly registered as a “foreign agent” in 2014. It was exactly its efforts in monitoring arrests during the mass protests of 2012-13 – that is to say, the work that in practice is carried out by OVD-Info – that were defined as “political activity”8Memorial: “On the situation around Memorial, a brief update. http://www.memo.ru/d/215713.html. Memorial refused to declare itself a “foreign agent” and was forced to pay a fine of 300, 000 RUB (then app.8, 000 euros).))

Funding for the work of the monitoring team of OVD-Info is raised through a crowd-funding campaign. You can donate and support its work by clicking the “Help the project” button on the organisation’s website. The first crowd-funding campaign was launched in December 2015. The financial report detailing the use of donations for the year 2016 shows that the group managed to raise 2,044,696 RUB and spent 1,928,135 RUB9https://ovdinfo.org/report-2016/. The main expenditure item – the wages of its four staff members (30,460 RUB each) as well as taxes (400,000 RUB), communication costs, bank account service charge and the service fee imposed by the payment service provider. Okhotin claims that today OVD-Info does not experience any problem raising funds through crowd-funding campaigns, however, in its early days the group often found that the banks wereunwilling to have anything to do with it.

Other costs and expenses are covered through special joint projects that OVD-Info carries out in cooperation with Memorial.  These are funded by the European Commission and the Fédération internationale des ligues des droits de l’Homme. In 2016 these two agencies provided a total funding of 1,421,783 RUB10https://ovdinfo.org/report-2016/#second.

Previously, OVD-Info was also supported by the Open Society Institute (Soros Foundation) and the National Endowment for Democracy (NED). However, both of these organisations  were declared “undesirable” and their activity banned in Russia. Any cooperation with either of them is punishable by a fine of 100,000 RUB, while the repeated infringement of this law is a criminal offence punishable by a fine or by 2 to 6 years in jail.[:]