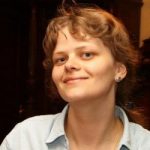 Anastasia Kirilenko is a Russian independent investigative reporter and radio journalist. Kirilenko graduated from Novosibirsk State University of Economics and Management in 2006 with a degree in International Relations, and earned a Masters in Journalism in 2007 at the French-Russian joint Master of Journalism at Moscow State University/French Institute of Press. In 2008 she worked as translator at the Human Rights Centre "Memorial". From 2009 to 2015, Kirilenko was a reporter at the Russian Service of Radio Free Europe/Radio Liberty, where she published a number of journalistic investigations on corruption in Russia. Kirilenko has also contributed to investigative films for BBC Panaroma, PBS, CBC, Radio Canada and other media. Since 2016 member of the expert group "Fighting transborder" corruption under the umbrella of the EU-Russia Civil Society Forum

Under the European Convention on Human Rights, states must guarantee free and open debates about the past. Yet, with the rise of memory laws, the right to free expression has been endangered.

Russia still has no domestic violence legislation. Will the case of the Khachaturian sisters, three girls who have been subjected to abuse by their father for many years, become a turning point in the adoption of such a law?

What is the future of Russian citizens extradited from EU countries to their homeland? According to the European Convention on Human Rights and European human rights case law, a country attempting to extradite an accused person must assess the risks that the person may face. But do the European courts assess these risks correctly?
Load more