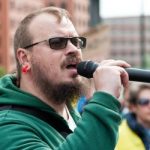 Steering committee member of the EU-Russia Civil Society Forum, founder and editor of the Article20 Portal, co-author of a monitoring methodology and state-of-the-art reports on freedom of assembly and freedom of association in the Russian Federation. In 2013, he was forced to leave Russia. In autumn 2013, Alexei participated in foundation of the organisation "Solidarity with the Civil Movement in Russia" (Solidarität mit der Bürgerbewegung in Russland). Since January 2014, he has been one of the organisers of the Conference "Repressions against Civil Society in Russia. Results of the Year". In 2014-2015, he was a postdoc fellow of the EU Programme at the University of Jena. Since 2015, Alexei has been Coordinator of the Programme "Modern Political Emigration from Russia".